The Pony Express of the Air 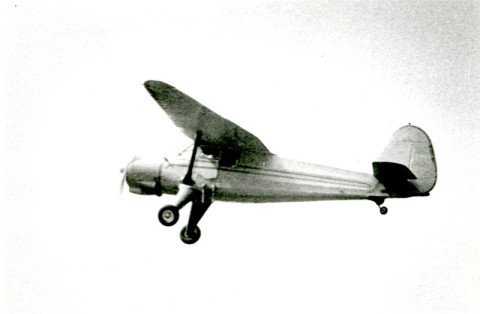 Eleanor Roosevelt  encouraged the start of the All American Aviation Service; formed by Richard Dupont on May 12, 1939.

The Pony express of the Air began in Latrobe.  Covering Scottdale and other small towns nestled in the Allegheny Mountains who did not have access to east-west airmail flights. 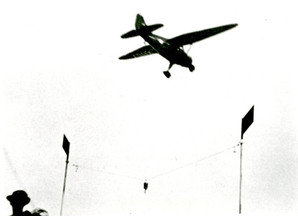 The then empty field on Loucks Road was Scottdale’s pick up station.  Each day at 5:00pm the postal worker came with a mail bag shaped liked a bomb.  They would set up two 15 foot slender poles 30 ft. apart.  The mail bag was positioned midway between the poles and was attached to a transfer rope that was strung between the two poles.  The single engine Stenson plane descended   from the sky at a speed of 100 miles per hour, dropped the incoming mail and lowered an arm with a hook to pick up the outgoing mail.    The second man in the plane reeled up the mail bag and the plane flew onto the next pick up site in Connellsville.  The final stop was at the Allegheny airport where the mail was sorted sand sent East and West to its destination points.  That process was done in a hours time.  So mail picked up in Scottdale at 5:00pm could be in delivered to the west coast by 10:00am the next day. 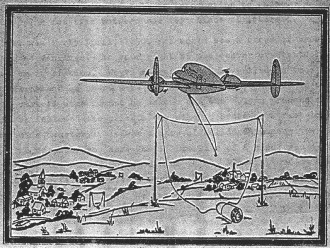 That’s how the system worked.  But the people who made it work were the postal workers, and pilots were the heroes of the story.  The skilled pilots flew in all kinds of weather and would report fires, delivered food to flood victims, and became folklore of the area.  At times they were mischievous swiping long johns from clothes lines and flying under bridges.  On holidays, friends would place meals for in-flight dinners.
The System expanded into 6 states and only one flier was killed in the ten year period of the All American Aviation Service.  So in 1949 after the service continued to lose money, and they began to transporting passengers instead.  It changed its name to Allegheny Airlines which became US Air.