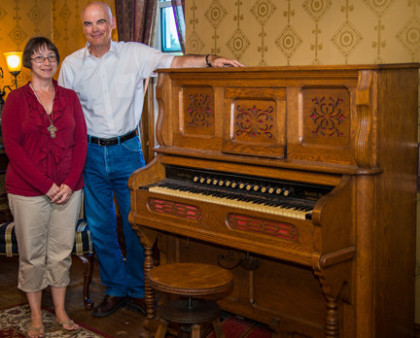 Scottdale Historical Society member Kimberly Fox with the Rev. Ray Beal, who donated a pump organ made in Scottdale to the society.

The Scottdale Historical Society has received a pump organ that was played for many years in a home on South Broadway.

The Rev. Ray Beal was born and raised in Scottdale on Market Street.  He is a descendant of Joseph Loucks, who lived at 304 South Broadway.

In that home was a pump organ manufactured in the borough by the Scottdale Organ Co. The organ was the centerpiece of the Loucks parlor and after many years it needed restoration.

In about 1968 Ray was given permission to refinish the blistering varnish and repair the working parts of the organ.

Robert Wilson of Scottdale helped with refinishing the case and Peter Malik of Everson helped with restoring the bellows and workings of the organ. The case was stripped and done in a natural oak but the interior section with the organ controls were left original, and still display the maker, Scottdale Organ.

Ray later inherited the organ from his great aunt’s estate.  Ray resides in Dubois and was looking for a place to have the organ showcased and preserved.

The historical society was contacted for the donation and we gladly accepted the generous gift.  The society was told that the Scottdale Organ Co. existed for a 6 to 12 month period in 1891.

Until that point we were not aware of the company’s existence.  The organ is now proudly displayed in the double parlor of the Loucks Homestead at 527 North Chestnut.

It was wonderful to receive an article belonging to a Loucks ancestor and an item that was made here in Scottdale.﻿ 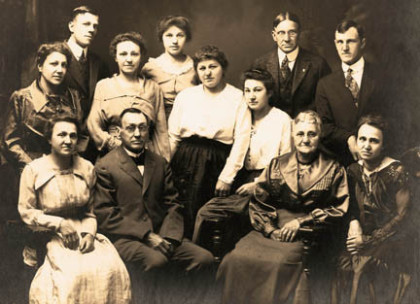 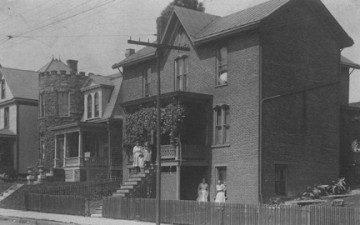 Joseph Loucks home, circa 1900, the original home of the pump organ.

The following information is the Rev. Ray Beal’s reflection on the pump organ and how it was used by his ancestors.

Beal is a grandson of Cecil Paul Loucks and he gathered the information from family members between 1960 and 1970. It is noted that although the original says Joseph R. Loucks was born in Scottdale, the community was not called Scottdale until 1874.

Of the children, four sisters never married: Minnie, Florence, Pauline and May. These four were given the family home at 304 South Broadway Which remained their residence until all were deceased and the house was sold sometime after Pauline's death in 1985.

While they lived there the house never had a central heating system. The basement kitchen and main floor were heated with coal in fireplaces and freestanding stoves. The sisters did not heat the rooms in the top (bedroom) floor during my lifetime, although provision was made for heating in the structure of the house.

At some point when the surviving sisters became too frail to manage the coal, a natural gas heater was installed in at least one fireplace.

I spent a great deal of my childhood in that house, and remember the organ stood in the parlor, which was not heated during my lifetime, and which was generally off limits to the children as it held the most formal furniture where in earlier years guests were entertained.

We were not allowed to touch the parlor organ without adult supervision. I was given access after I began taking piano lessons, sometime around 1960, which was the year Minnie died. The organ had not been restored at that time, but was playable. At that point the varnish was flaking.

When I began the work of stripping the wood and refinishing the case, the inside mechanism was entrusted to a Mr. Peter Malik of Everson, who mainly replaced the fabric and leathers of the bellows.

According to the surviving sisters, the pump organ was purchased for Minnie to learn to play. Since it was manufactured no earlier than 1891, she would have been at least 10 years old when the organ came into the house. It was placed in the parlor of the house at the corner of South Broadway and Orchard Street.

The room was on the main floor in the Northeast corner of the house. It was never stated if Minnie ever mastered the instrument or if any of the other children were given any musical instruction.

The other showpiece of the Loucks parlor was a wind-up RCA victrola, which stood on legs in a handsome case with a hinged lid and included storage for recorded disks.

The machine and the disks were given to my sister, Linda Joyce Beal Banks, who now resides in Kingview, the wife of James Banks, also of Scottdale.  I assume she still has the old record player.

I can still recall some of the disks, many of which were only grooved on one side, and which we played many, many times over the years. ﻿