The history of baseball in the United States can be traced to the 18th century, when amateurs played a baseball-like game by their own informal rules using improvised equipment. The popularity of the sport inspired the semipro national baseball clubs in the 1860s. In 1903, the British sportswriter Henry Chadwick published an article speculating that baseball derived from a British game called rounders, which Chadwick had played as a boy in England. But baseball executive Albert Spalding disagreed. Baseball, said Spalding, was fundamentally an American sport and began on American soil. To settle the matter, the two men appointed a commission, headed by Abraham Mills, the fourth president of the National League of Professional Baseball Clubs. The commission, which also included six other sports executives, labored for three years, after which it declared that Abner Doubleday invented the national pastime. This would have been a surprise to Doubleday. The late Civil War hero "never knew that he had invented baseball. 15 years later, he was anointed as the father of the game.

Baseball became America’s pass time, inspiring sport’s legends, songs, and a field of dreams. Every small town had some type of league; from schools, clubs and organizations to industrial companies forming their own teams. Scottdale was no exception for the many teams and the love of baseball.

Here is a 1946 photo of the American Legion Junior Baseball team. 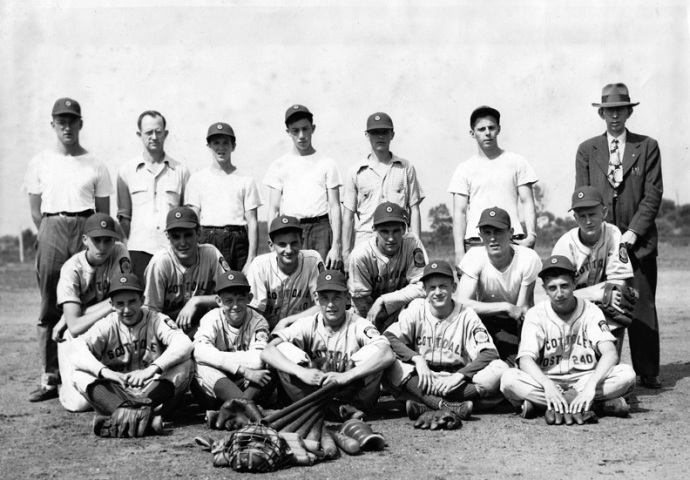 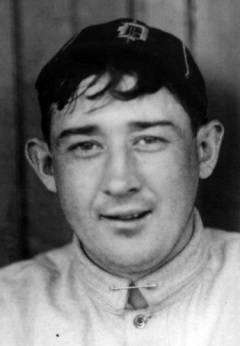 At age 60, Onslow became one of the oldest rookie managers in MLB history when he was named skipper of the Chicago White Sox in the fall of 1948, succeeding Hall of Fame pitcher Ted Lyons. Onslow managed the South Siders for the entire 1949 season, finishing sixth in the American League with a 63-91 record. But he could not get along with his boss, Chisox general manager Frank Lane, and clashed with players and the media. After a poor start in 1950, when the White Sox dropped 22 of their first 30 contests, Onslow was replaced by one of his coaches, Red Corriden. His career record as a manager: 71 wins, 113 defeats (.386).

In addition to his coaching career, he scouted for the White Sox and Boston Braves for several years and held a similar job with the Red Sox when he died, at 72, in Concord, Massachusetts, from a heart attack on December 22, 1960. To people around the game, Onslow was known as one of the most garrulous raconteurs of his day.

If you can share Onslow's history of his time, family, schooling here in Scottdale, please Contact Us. 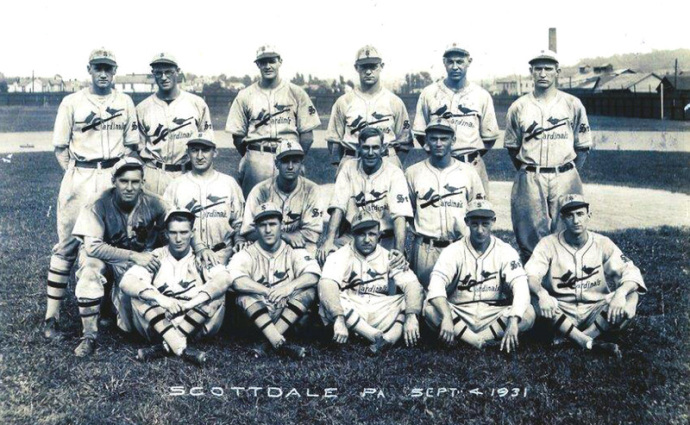 Time was when nearly every baseball team, from Little League to the majors, endeavored to play the game "The Dodger Way" or "Cardinal Style."

For most of the 20th century and beyond, those two highly successful MLB ballclubs represented the gold standard for the proper way to perform on the diamond - from the way you wore your uniform to fundamentals and strategy.

Dating back to 1930s, when Dizzy and Daffy Dean and the rest of the famed "Gas House Gang" cavorted on and off-field, St Louis had always built its game on contact hitting, speed on offense, excellent defense and intelligent pitching.

Many of the new ball players spent a couple of seasons in the low minors in the St. Louis system at whistle stops at: Danville, Illinois; Keokuk, Iowa; and Scottdale, Pennsylvania.  YES  The Scottdale cardinals of the Middle Atlantic Baseball league were here from 1925 to 1931.  For that seven year period, Scottdale was the smallest town in the world to operate a class "C" professional baseball team. 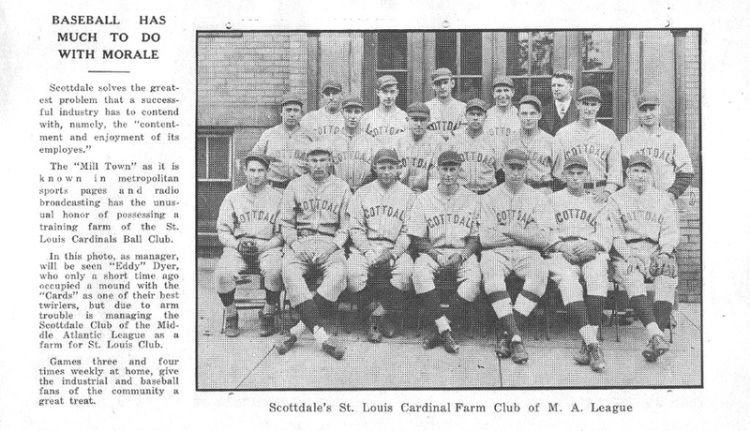 Points of interest written are from Scottdale Cardinals 1925-1933 complied by Matt Miller.

When the Minor league team came to Scottdale, it was the first time for an agreement between a Major league and municipality took place.  Visiting teams would come into town and stay for three to four days adding business to our hotels, restaurants and stores.

The games were played at Athletic Park (which was located in the open field area northeast of today's Borough building and Scottdale Ave.).  The greatest discovery for the Scottdale Cardinals was Scottdale's love for baseball and they were treated like heroes. The players respected our town and the fans.  They would dress at the YMCA and at times walk to the ball field, creating a parade of young fans. It would be commonplace for a player to take a young boy's sleeve and escort him into the park to watch the game without a ticket. In a Feb. 1929 column; Ellis Emmons Reed, sports writer for Newark Evening News wrote "On previous visits I have seen the Scottdale team in action and I have seen the community turn out inloyal support of their representatives in the Middle Atlantic League, and no further evidence is necessary to convince me that Scottdale is one of the best baseball towns of its size in the country.  I don't know of any town where baseball interests runs higher or where fans are more loyal." 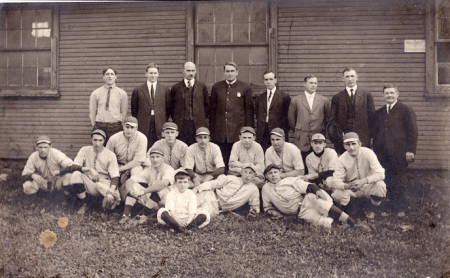 In addition to the baseball frenzy were the Mill/ Industry teams. The US Cast Iron Pipe and foundry was the largest employer in town with over 1,500 workers. 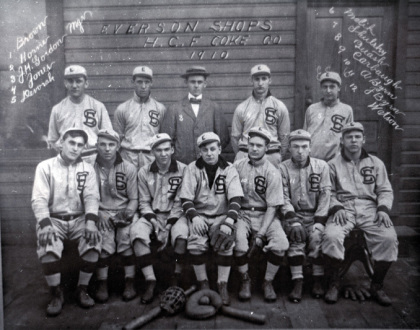 The H.C. Frick Co .offices on South Broadway  controlled the major coal and coke in South western PA.  This image is from 1910 and shows the H.C. Frick company team in front of the car shop located in  Everson. 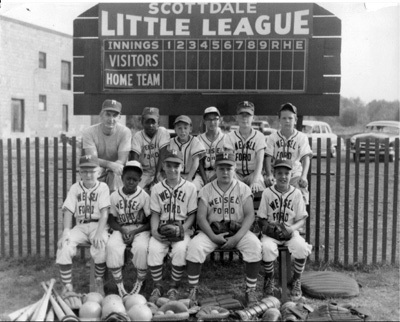 Fifty years later; the Scottdale Borough, Rotary Club, and Southmoreland Recreational league wanted to honor the founder of Little league baseball in Scottdale. A dedication ceremony; renamed the Garfield park field, the John H. Spisso Field with a marker placed at center field on May 2, 2004.

Special thanks to Dave Ramsey for information about the Scottdale Little League and Dave Reynolds for the photo.

If you can share more information on any of the baseball images and stories, please contact the Scottdale Historical Society.