The first mass transportation vehicle in America was called an omnibus. It looked like a stagecoach and was pulled by horses. The first omnibus to operate in America began running up and down Broadway in New York City in the year 1827.  The improvement over the omnibus was the streetcar. The first streetcars were also pulled by horses, however, instead of riding along a regular street, the streetcars rolled along special steel rails that were placed in the middle of the street. The first streetcar ran along Bowery Street in New York, and began service in the year 1832.  For over 50 years the cities and towns relied on the horse drawn streetcars for public transportation.

The first successful electric street railway installation in the United States, was in Richmond, Virginia in 1888. It wasn't long, after the initial success in Richmond, that almost all of the horse car lines in North America were converted to electric power. The electric streetcars were soon called trolleys. Trolleys became so popular with the riding public, that the street railway industry, experienced explosive growth in ridership, almost overnight.

In 1889, the Greensburg and Hempfield Electric Street Railway Service started the first run in Greensburg.  By 1891, tracks were laid along Broadway by the Scottdale, Everson and Broadford Railway Co.; which was chartered Oct. 8, 1891.

This circa 1900 image shows a Trolley at the intersection of Broadway and Pittsburgh Street.  The trolley was a faster means of travel, opposed to the other forms of transportation shown here with the horse and buggies/wagons. 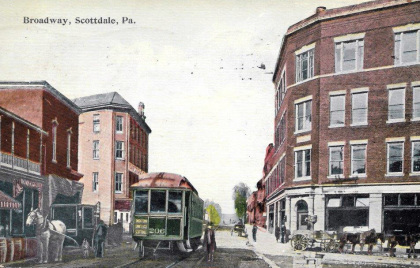 This image shows Broadway looking North, left fore-ground, is known today as Carson's Restaurant.  The four story building left of center was the Scottdale House, one of Scottdale's many hotels now the site of Standard Savings.  The large building on the right is the Broadway Bank, now the site of the PNC drive through bank.

The Trolly became the most popular form of public transportation because they were very economical to operate.  Trolleys could carry passengers between the same cities as the steam railroads, for less money.  So the fares on the interurbans, in most cases, were cheaper than the steam railroads.  Also, because interurban trolleys could make more frequent stops, they became popular with farmers, and other people who lived in rural areas.  The ability to stop at rural road crossings for passengers, and then accelerate back to top speed quickly, allowed the interurban lines to serve a market, that was impossible for the steam railroads to serve economically.

In many parts of North America, before automobiles and trucks, the interurbans were the only way to travel, and move products to market quickly, and economically.  By the time of World War I, the street railway industry was the fifth largest industry in the United States, employing well over 100,000 people nationwide.

The West Penn system built a power generator in Connellsville in 1903. This supplied enough electricity to power a longer reach for the trolly system. West Penn Railways was chartered on February 18, 1904, and  consisted of 339 miles of electric trolley railway at its peak.  West Penn railways serviced transportation  from McKeesport, Latrobe and Trafford through Greensburg, Mt Pleasant, Connellsville, Scottdale, and Uniontown to Fairchild, Martin and Brownsville.

For residents living near the trolley lines, they quickly tapped onto the power lines and starting to buy their first light bulbs.   West Penn System quickly saw this opportunity and promoted the sale of electric irons; and the need for their electric.  Before long, the electric service over took the sales volume of the electric railway. 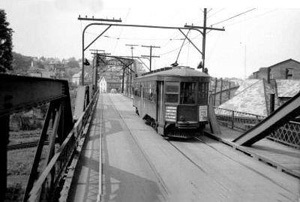 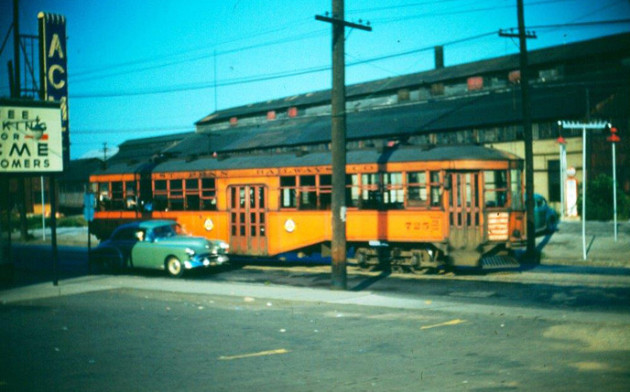 A trolley moves down Broadway in Scottdale near the former Acme site.

The trolley started to see it’s demise with the popularity of the automobile and bus transportation of the 1920’s   Many of the auto and oil manufacturers bought out the trolley lines during the depression of the 1930’s closing many electric railways .  However, the bombing of Pearl Harbor, the gas rationing and stop of auto production of World War II was a boom for the remaining Trolley systems.  Many of the Trolley lines boasted the largest boom in travelers, surpassing the numbers of the early 1900’s.  Post World War II saw the return of auto production, bus transportation increases,  plenty of gasoline, better highway systems, and  urban sprawl.  These economic increases saw the decline in the trolley and West Penn Railway.   An unsubstantiated story holds that once television reached the region, West Penn's management, facing an obvious future of fewer and fewer riders due to people staying home to watch TV, decided to abandon railway operations quickly. At one point near abandonment, the still well maintained big orange trolleys ominously carried signs reading, "To keep the 5 cent  fare we need more riders." 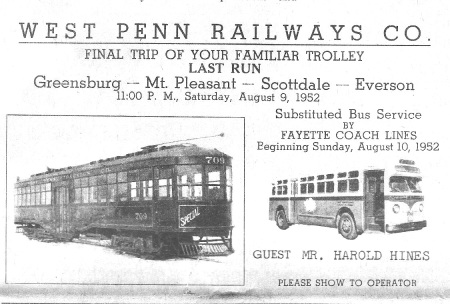 On August 9, 1952 the last scheduled trolley run started in Greensburg at 11:00 p.m.  Scheduled stop in Mount Pleasant at 11:45 p.m. and last stop in Everson at 12:05 a.m.   The Fayette Coach Lines promoted the last trolley run with the notification they were the only public transportation from Uniontown, Connellsville, Everson, Scottdale, Mount Pleasant and Greensburg.