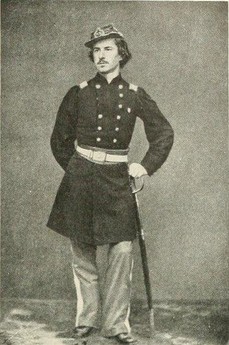 He studied law in Lincoln's office and helped Lincoln with his 1860 campaign for president. The Civil War broke into open warfare in April, and on April 15, 1861, Lincoln called for 75,000 troops to put down rebellion.

On May 24, 1861 (the day after Virginia's secession was ratified by referendum), Lincoln looked out from the White House across the Potomac River and saw a large Confederate flag prominently displayed over the town of Alexandria, Va.

Ellsworth immediately offered to retrieve the flag for Lincoln. He led the 11th New York across the Potomac and into the streets of Alexandria uncontested. He detached some men to take the railroad station, while he led others to secure the telegraph office and take down the Confederate flag, which was flying above the Marshall House Inn.

Ellsworth and four men went upstairs and cut down the flag. As Ellsworth came downstairs with the flag, the inn's owner, James W. Jackson, killed him with a shotgun blast to the chest.

Lincoln was deeply saddened by his friend's death and ordered an honor guard to bring his Ellsworth's body to the White House, where it lay in state in the East Room.

Ellsworth was then taken to the City Hall in New York City, where thousands of Union supporters came to see the first man to fall for the Union cause.

After the end of American Civil War, organizations were formed for veterans to network and maintain connections with each other. Emerging as most influential among the various organizations was the Grand Army of the Republic, founded on April 6, 1866, on the principles of "Fraternity, Charity and Loyalty," in Decatur, Ill., by Benjamin F. Stephenson.

The Scottdale veterans wished to honor Ellsworth and the Col. Ellsworth Post, No 209, GAR, was organized in May of 1881. This 1887 photo shows an encampment in the woods that later became Scottdale’s Ellsworth Park. 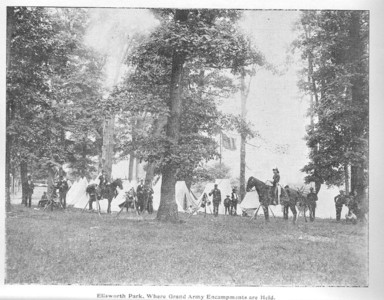 The Grand Army of the Republic (GAR) was a fraternal organization composed of veterans of the Union Army, U.S. Navy, Marines and Revenue Cutter Service who served in the American Civil War.

Founded in 1866 in Decatur, Ill., it was dissolved in 1956 when its last member died. Linking men through their experience of the war, the GAR became among the first organized advocacy groups in American politics, supporting voting rights for black veterans, lobbying the U.S. Congress to establish veterans' pensions, and supporting Republican political candidates.

Its peak membership, at more than 490,000, was in 1890; a high point of Civil War commemorative ceremonies. Membership was limited to honorably discharged veterans who served between April 12, 1861 and April 9, 1865.

The community level of the organization was called a post and each was numbered consecutively within each department (generally a particular state). Most posts also had a name and the rules for naming posts included the requirement that the honored person be deceased and that no two posts within the same department could have the same name. The national organization was run by the elected Commandery-in-Chief.

The Col. Ellsworth Post, No. 209, GAR held weekly meetings and in 1882 the post enrolled 62 members and the patriotic ladies presented the post with a full stand of colors. The post secured a 20-pound cannon, and old style muskets.  In the meantime a Ladies Auxiliary was formed and gave material aid to the association. 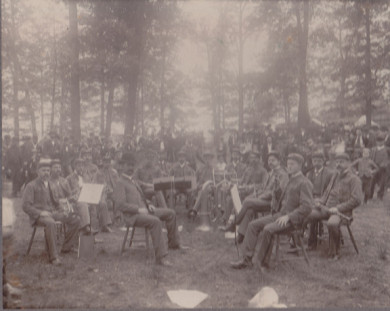 This second image (right) shows members of the GAR band members involved with the post. By 1899, the membership was down to 40 members, four had died since the post’s organization.

The encampments did reenactments of the old battles, and the members had pleasant and sad memories of those four years of strife. 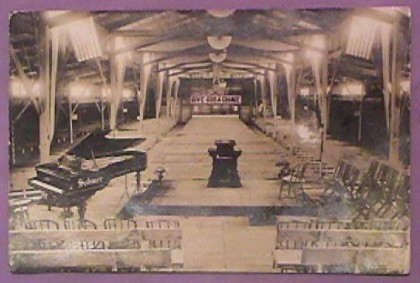 This circa 1900 photo (left) shows the interior of the Ellsworth Park auditorium after it was arranged for a Women's Christian Temperance Union convention.

The Ellsworth Park Association advertised the spot as one of the most beautiful recreation spots in Southwestern Pennsylvania, located on the southern border of Scottdale.

Its rolling tract of ground contained almost 7 acres, with half the surface covered with giant oaks and primeval forests and ornamental trees, thus furnishing abundant shade.

The park association made many improvements including a stately auditorium 60-by100-feet with a seating capacity of 1,500 and provided a center stage, and two retiring rooms.

The park had a refreshment stand, dining room, and other accommodations for the host of visitors each year and was illuminated by both gas and electric lights (listed in 1899) and enclosed by a tight board fence.

The officers of the association in 1899 were: Fred Johnson, president; J.P. Brennen, vice president; and S.C. Stevenson, secretary. 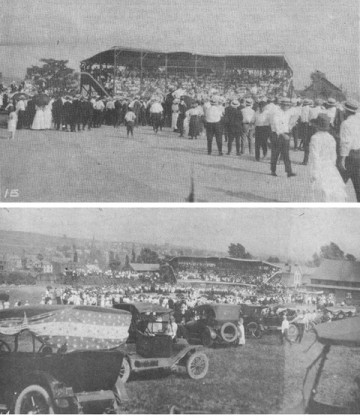 The grandstand area was the scene for many holiday and sporting events. The auditorium on the right is were dances and skating parties were held.

On July 3rd, 1919 the "Entre Nous" bridge club sponsored a dance. They prepared refreshments and John Kiferie and his orchestra played the music.

In addition to these activities, every year after the July 4th parade there was a big celebration and baseball game and everyone had a picnic in nearby Keister's Woods (now Tintsman Estates).

This photo with all the cars and the grandstand show the homes of the Browntown area of Scottdale, Fifth, Fourth and Third avenues. The building on the far right was better known through the 1950's-1980's as Steiner's Roller Rink. 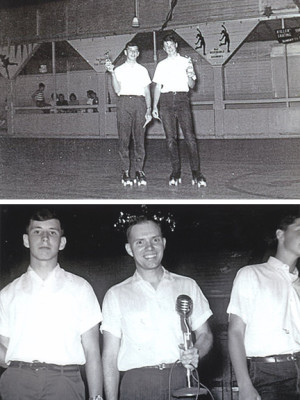 Although it is difficult to verify when the Ellsworth Park Association disbanded, and the land gave way to building lots. The auditorium became Steiner's Roller Rink, and maintained the park's spirit as a place for the community to gather, have fun, and grow.

The top photograph is a June 1965 image of skate-a-thon winners at Steiner's Skating Rink. Wayne Hodge and Dennis Beran; friends and neighbors (Fourth Ave.) were the last two skaters. In the spirit of good sportsmanship they stopped skating at the same time; 36 hours, or 180 miles.

There were only hourly breaks of five minutes during the contest. The second image shows Bill Steiner (center) presenting trophies to the winners.

The first image helps us to recall the roller rink itself. Generations of Scottdale and nearby residents spent many hours at Steiner's. Fond memories include those of the corner game, the two-step, hokey pokey, and the Congo. There would be occasional scuffed knees and elbows on the "fast skate." 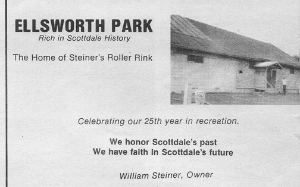 As we grew older, "the couples skate" and the "Lady's Choice" were a dater's dream. The sounds of the organ music mixed with contemporary songs of the day would be played for the "All Skate;"; that became or first introduction on how to manage crowded roads as we became motorists.

Sadly, Ellsworth Park and  Steiner's are memories; but sweet memories they are.