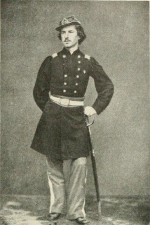 He studied law in Lincoln's office and helped Lincoln with his 1860 campaign for president. The Civil War broke into open warfare in April, and on April 15, 1861, Lincoln called for 75,000 troops to put down rebellion. More>>

This 1920 photo of Brilhart hardware shows an early view of the long standing Scottdale business located on South Broadway.  More>>

This 1949 photo was taken during Scottdale's 75th Anniversary. If you look closely you can see Frank Davis in the barber shop window trimming hair. The Davis shop is the oldest barber shop in town. Cora (Davis) is shown outside the Scottie Grill.  More>>

This circa 1900 image shows the Hepler residence. Included are George C. and Elizabeth (Lizzie) Hepler, and their two daughters, Lelia P. and Zella M. Mr. Hepler was employed at the Keister feed mill on North Broadway.  More>>

In those days traveling required a lot of time. Trains, streetcars, horse and buggy as well as the early automobiles made a simple 50 mile trip become an all day task. Travelers would require overnight accommodations' for what we consider an afternoon drive today.  More>>

During the 1920's, Floyd Hoffman owned three drug stores in Scottdale. Floyd purchased this store at that time and called it Hoffman's Drug Store.  The store offered more than medical needs. Residents could purchase sodas, cigars, or an ice cream cone for five cents.  More>>

Here is an 1899 advertisement for the C. H. Jaquatte Jeweler located at the Parker corner.  This is a difficult building to place, it was razed many decades ago.  Possibly the sidewalk mounted clock will be a clue as to the location.  More>>

The Kromer house was one of six hotels in Scottdale built by N. Kromer in the 1890's. Today we would have to take a moment to picture this location.  The plantings in the rotunda were located near the area where the Sheetz gas pumps are today.  More>>

This circa 1966 photo shows Scottdale's favorite swimming spot, Lake Forest. During the 1920's, these picnic grounds, and lake were originally known as Briercheck's.   More>>

This circa 1970 photo shows the corner of Pittsburgh and Spring Streets, the second home for McCrory's Department store.  The first location was on Pittsburgh and Stoner Streets, where the Eagles is located today. More>>

The Mennonite Publishing House roots started in 1907 by the generosity of Jacob S. Loucks.  Jacob was known to have established many business's in Scottdale.  One of Jacob's business interests was the start of the Gospel Witness Company.. More>>

The sign on the corner identifies the business as the  Scottdale Motor Garage. The Automobile garage was located on the corner of  North Hickory and Brook. More>>

A post office has been here since the 1860s.The town was called Fountain Mills and the original frame structure was in the Water Street area by the railroad tracks. More>>

The first Provident Bookstore opened on Christmas Day in 1907 on the corner of High and Walnut Streets when the Mennonite Publishing House was established.  More>>

This 1899 image shows the Scottdale Bank that was built in 1895.  The Bank was located on Pittsburgh Street near the current location of Standard Savings and Trust Co.  More>>

This 1927 photo of the Waverly Gas station was one of five along Broadway, also known as Rt 119 at that time. The Waverly was located in the area beside Davis Monuments where the vacant mini market is today.  More>>