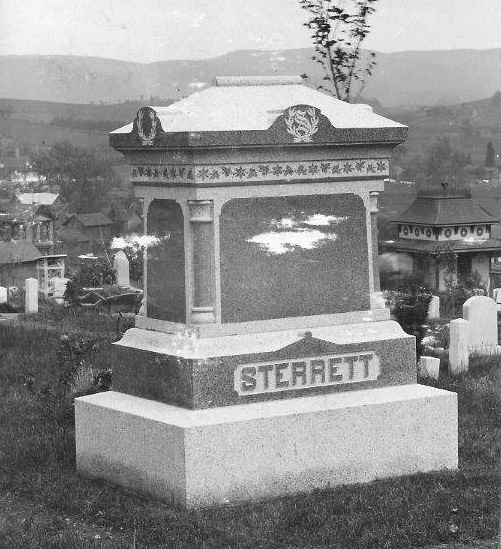 This circa 1900 image may seem a little unusual by today's viewer. But at the time of this photo, the local cemetery was usually the towns first public park. Before 1831, America had no cemeteries. It's not that Americans didn't bury their dead, but large, modern graveyards did not exist. With the construction of Mount Auburn Cemetery, a large burial ground in Cambridge, Massachusetts, the movement to build cemeteries in America began.

By the middle of the 19th century the cemetery was a place to spend a Sunday afternoon, taking a picnic lunch, and spending the day visiting and paying respects to departed family and friends.  This image shows the Sterrett family marker for the Sterrett family.  The large family monument was usually surrounded on all four sides with the graves and individual tombstones of the deceased family member.  These markers usually all faced towards the large center family marker.  If you look beyond the graveside marker, look to the left and see the ornate caretakers building. A typical spot to stop for water to maintain pantings at the gravesides.

Beyind the cemetery are homes from Second and Third Avenue known as one of Scottdale's Browntown area. The Sterrett family is one of the oldest names in Scottdale, with their family history traced back to hosting Daniel Boone as he traveled west for the westward expansion trips.