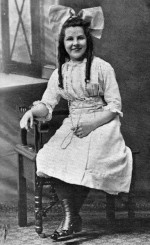 You Should Know Marie

(This text appeared in a memoir Marie produced called, "Out of the Clear Blue Sky.") 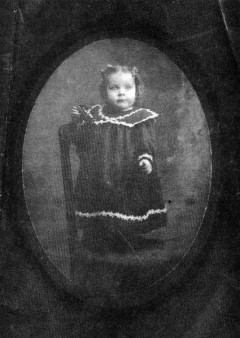 Here are images from the April 6, 1988, Independent-Observer on a well-known Scottdale resident, Marie May Hyatt.

Marie's father;  J. C. May was a blacksmith who had a livery and boarding stable on Broadway.

The image of the four May children was taken in 1903 by H.J. Springer to settle a debt the photographer had with J.C.'s livery stable.

J.C.  took the children to the second floor Springer Studio on Pittsburgh Street, above what is Miss Martha's Floral today. The children had been playing outdoors and there was no time taken for the children to wash or even comb their hair.

The single photo of Marie is from 1902.  Marie's mother worked for the Peter S. Loucks family, who lived in what is now the homestead for the Scottdale Historical Society.
Marie later married Ralph Hyatt, a supervisor for the car barns of the West Penn Railways in Connellsville.    Marie May Hyatt had a continued link to the Peter S. Loucks Homestead. She was instrumental in the founding of the Scottdale Historical Society in 1976.

The society's office started in the Loucks Homestead's springhouse. 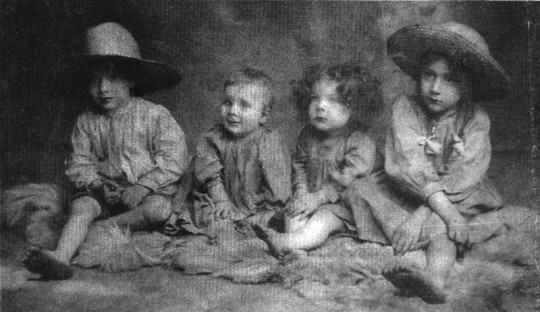 An H.J. Springer original is this charming picture of, from left, Gilbert, Joe, Marie and Cosey May. Harry Springer took this picture to settle a debt with J.C. May, owner of a livery stable. 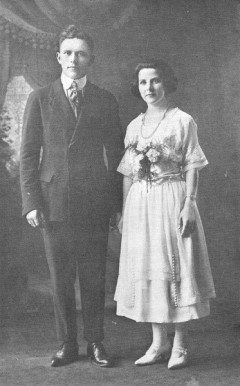 Ralph Waldo Hyatt and Marie May

Wed Sunday, May 8, 1921. Marie wore a white crepe gown with a sheer overskirt made by Mina Bates who lived on Chestnut Street in Scottdale.The corsage of white carnations (Marie's favorite flower) was given by Ralph. He wore a navy suit.  Marie's cousin Ola Stauffer played the wedding march on the family piano in Marie's Mill Run Home. ﻿ 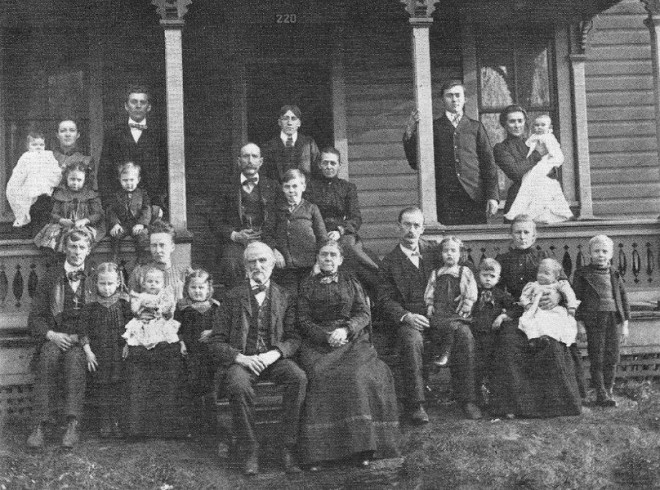 This 1901 image of the May family was taken at their family home located at 220 Everson Ave. It was located on in the area behind the Library when Everson Ave. was connected to Pittsburgh Street and Mulberry.  Jacob and Thomas May ran the livery stable located in the area of the Napa parking lot on North Broadway.  Shown from left are Harry May and wife, Lizzie, with their children,Hazel, Earl and Goldie. George Reed and wife, Mary Ann, (grandparents)  Amos Lohr and wife, Mamie with children Grace, Russell, Edith and Monroe.  Left side of porch is Jacob Clinton May and wife, Susie, with children Marie, Cosey, and Gilbert.  Thomas May with wife,  Jane, and George and Alvie and John Stauffer and wife, Daisy, holding daughter, Ola. ﻿ 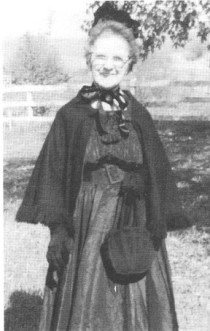 This late 1980s image is of Marie Hyatt modeling the common dress of 100 years earlier.

Farming in Scottdale During the 1800s

In the late 1980s, longtime resident Marie May Hyatt wrote an article about farming in the Scottdale area in the 1880s. The text of that article follows.

The menace of Indian attacks was a deterrent to civilization in Western Pennsylvania. Traders, trappers and hunters opened the area for settlement.

One of the most important battles in American history was fought at Bushy Run. After the Revolutionary War, land speculators entered western Pennsylvania.
The French and Indian War ended in 1763. The American Revolution was 1775-1781. The country beyond the Appalachians was little known and a journey across the mountains was considered perilous indeed. The area was covered with thick forests which was inhabited by wild animals and hostile Indians.
Hunters and trappers came first. They followed narrow foot trails made by the Indians. Settlers found this area very dangerous. A small family might be seen silently wending their way along the road with a few pack horses loaded with blacksmith tools, bar iron, salt and dry goods.

Agriculture was the chief industry on the western Pennsylvania frontier. Later when the trails were wider, brave pioneers loaded covered wagons for the trek west. These men and women accepted the hard life of the frontier because land in the East was scarce and expensive.

These people had the courage to face hardship and death for their own beliefs. They were determined to
win self and community respect, and happiness.
The real pioneer was a home-maker and a cabin builder. He had the desire to get land, build a cabin, and win a living for himself and his family in his own way. In erecting his cabin in the clearing, he erected the symbol of America for years to come.
The farms of the settlers took the natural formation of the land as their boundaries. The early settlers in this area had crude methods of farming and their first task was to clear the land since practically the whole surface of Pennsylvania was covered with virgin forests.
The early settlers had plows, harrows, carts, scythes, shovels, hoes, spades, axes, sickles, rakes, pitchforks and wheelbarrows.
After the land was cleared, it was broken up, harrowed and rolled. Rollers made of logs cut from large trees were used to crush clogs and to compact the soil.
The seed was planted by hand. Stable manure was the principal fertilizer. Livestock was mostly kept in the open; much manure was wasted.
Most farmers had not heard of rotation of crops. It was customary to sow grain crops year after year on the same land. Wheat was the leading crop; corn took second place.
In the 1800s there were several prominent farmers. The early pioneers settled in East Huntingdon Township. The Scottdale area was farm land. Peter S. Loucks and Jacob S. Loucks divided their farm into lots.
Pittsburgh Street (road) was the division between the two tracts. The first lots were sold in the fall of 1872 for $150 each. About 50 acres of the farm land went to make up the town of Scottdale.
Scottdale, a productive farm land was incorporated as a borough in February 1874. The post office of Fountain Mills was located here and it was a grain market for a large and productive territory for a number of years before the railroad was built or the town laid out.
The first settlers in this area were Scotch-Irish and then pioneers came from the Mennonite Church. They were thrifty farmers and brought with them good supplies of livestock and some farming implements.

The Mennonites settled largely between Stonersville (Alverton) and the Fayette County line. It is said that the members of this church owned 25,000 acres of land in this area. The hills and valleys were prized for the value of the crops and grain which they could produce. This was a most picturesque pioneer district which grew into a beautiful and prosperous aglicultural community.
In the year 1830 -- the invention of the McCormick reaper and steam-powered threshing machine became a new age to farming. This marked the transition from the hand to the machine age.
The Department of Agriculture was born in 1862. The bill was signed on May 15, 1862 by President Abraham Lincoln. The sun rose and set; harvest followed seed time. People ate, slept, worked, loved, dreamed and hoped. Animals and men were the power that tilled the soil.
The development of tractors and tractor-drawn machines in the late 1800's provided farmers with a new source of power. It wasn't until the 1920s that the all-purpose tractor was developed. Then some quick changes came to farming.
Scottdale area has good soil quality, and the climate and rainfall are good for productive agricuiture. Westmoreland County has always ranked high in production of corn and wheat, oats and hay, and especially in the hay production.
The farmer and his family are shaped by all seasons, and sustained by a belief in Spring.

Summer you grow
Autumn you harvest
Winter you plan it all again.﻿