Around Scottdale and Everson 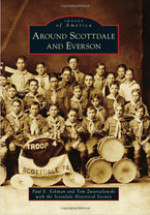 "Around Scottdale and Everson," compiled by Paul E. Eckman and Tom Zwierzelewski with the Scottdale Historical Society. A compilation of history and photographs include images of long-gone buildings and scenes from the community's heyday.

The book is available for $20 at the Scottdale Public Library or at Brilhart Ace Hardware. They also are available through Arcadia Publishing and Barnes and Noble booksellers. Here's a link to the story on the book that appeared in the Tribune-Review.

Also available is a book by retired Southmoreland High School history teacher Bob Percy called, "Profiles of Service and Sacrifice." The book details the stories of service by Scottdale area residents in World War II. Here's a link to a story about the book. 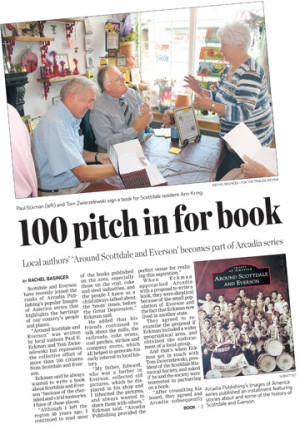 Scottdale and Everson have joined the ranks of Arcadia Publishing's popular Images of America series that highlights the heritage of our country's people and places.

Eckman said he always wanted to write a book about Scottdale and Everson “because of the cherished and vivid memories I have of these places."

Read the rest of the story on the TribLive website.

The book is available for $20 at the Scottdale Public Library or at Brilhart Ace Hardware. They also are available through Arcadia Publishing and Barnes and Noble booksellers.