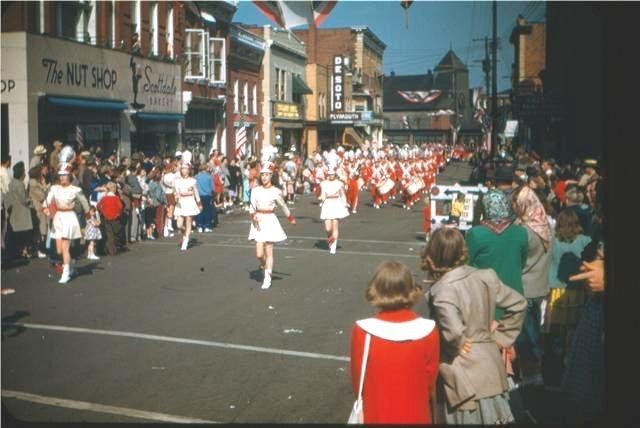 This circa 1950 parade photo was taken at the intersection of Pittsburgh and Chestnut Street. Looking East on the North side of Pittsburgh Street (left side of photo).

Many sweet memories of the Nut Shop and Scottdale Bakery come to mind.  The Nut shop was razed and is now the site of King’s Investigations.  The Scottdale Bakery site still offers oven baked goods, now J.J.’s Pizza.

The next building is the home of the Independent observer followed by a business office.  Next in line is the Scottdale Pharmacy, originally Dr. Weddell’s home and office were on that site and was home to previous pharmacies.

Did you notice the Desoto and Plymouth auto dealer sign for the Kepnar Motor Co.?  This is now the home of Chains Bakery, Master of the Wok and Joe Cappa’s Barber Shop.

Next Cossel’s market, now vacant. Then  McCrory 5 and 10 , now a dollar store.

After Spring Street take notice to the tower of the Arcade Theater; now the park and setting for the gazebo.

Entertainment has been a long tradition on that corner  many wonderful movies in the Arcade were interrupted when a bat would swoop down and fly across the auditorium.  “Chewing Gun Liz”  (Betty R. Zane) played the piano and a Saturday matinee was a nickel to get in.  The Arcade was originally built as the First Baptist church (site of the organizational meeting of the Y.M.C.A.).